Persistence of Pong (P.O.P.) is a playable installation by Pittsburgh-based artist and musician Jesse Stiles.

An ordinary ping pong table is augmented with reactive sounds and lights, turning the game into a disorienting synesthetic experience for players and spectators alike. The installation presents players with syncopated patterns of light that play with the illusion known as persistence of vision – the phenomenon that distinguishes between the perception of still images versus continuous motion. These patterns are triggered directly by the bouncing of the ball, which is detected by microphones embedded in the table. Similarly, the installation presents disorienting patterns of sound that teeter between rhythm (individual sounds) and pitch as the speed of the action increases and decreases based on game play. Players may choose to cooperate by trying to keep the ball in play through increasingly hallucinatory levels or may seek to destroy the competition in the most disorienting ping pong environment technology can provide.

Warning: this installation involves intense flashing lights that may cause discomfort or trigger seizures in people with photosensitive epilepsy. Viewer discretion is advised.

Persistence of Pong will be playable throughout LIKELIKE’s winter break by appointment and during the February 7th gallery crawl. 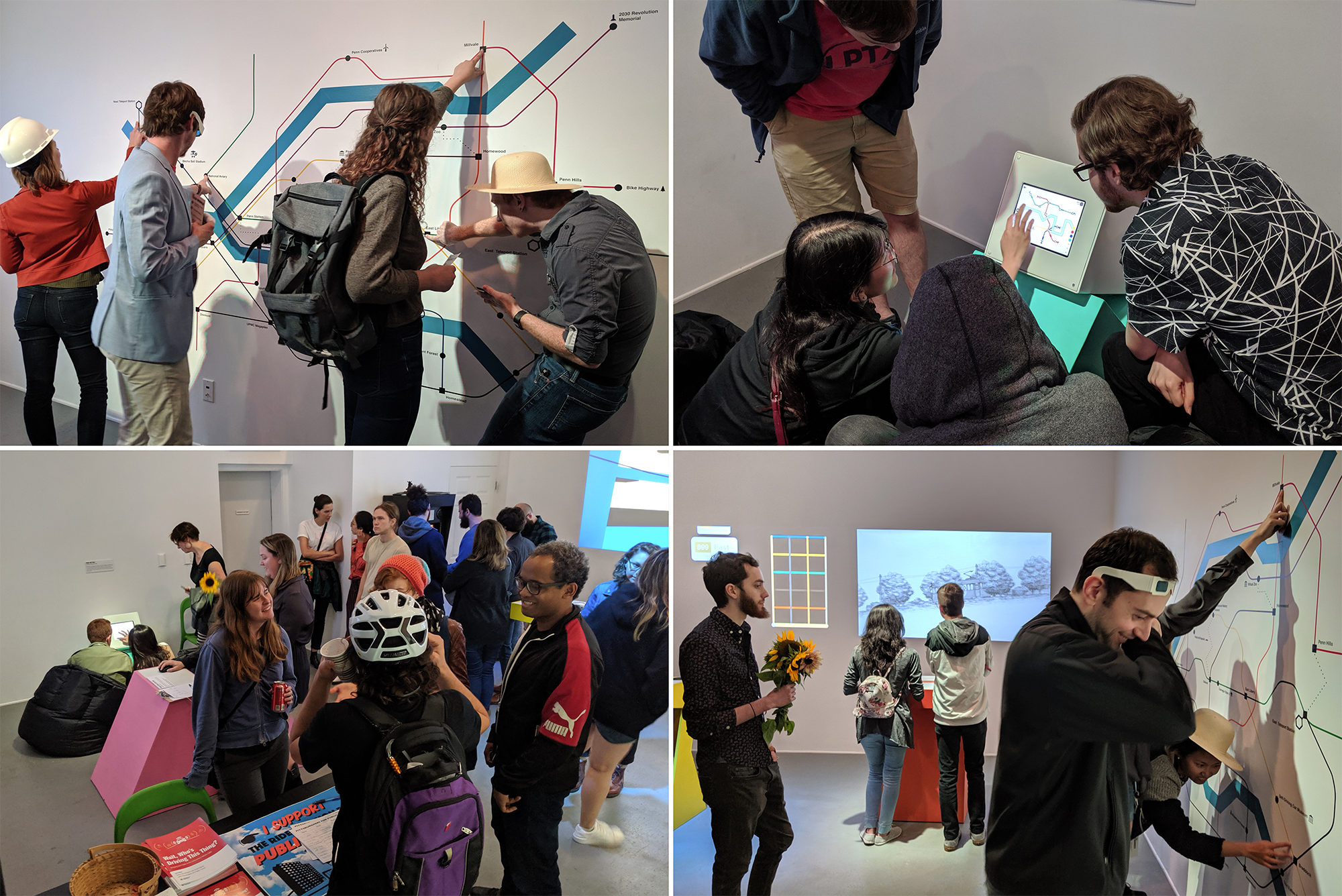 A special show featuring videogames that transcend standard hardware. Have you ever played a VHS, an LED strip, or an oscilloscope? Have you ever used your sense of smell in a videogame or strapped a joystick on your crotch? This may be your only chance!

The soccer world cup is over and football season hasn’t started yet, but don’t despair! This exhibition will quench your cravings for any ball sport. Bring your friends or challenge strangers in four multiplayer games that radically reimagine American and unamerican football. 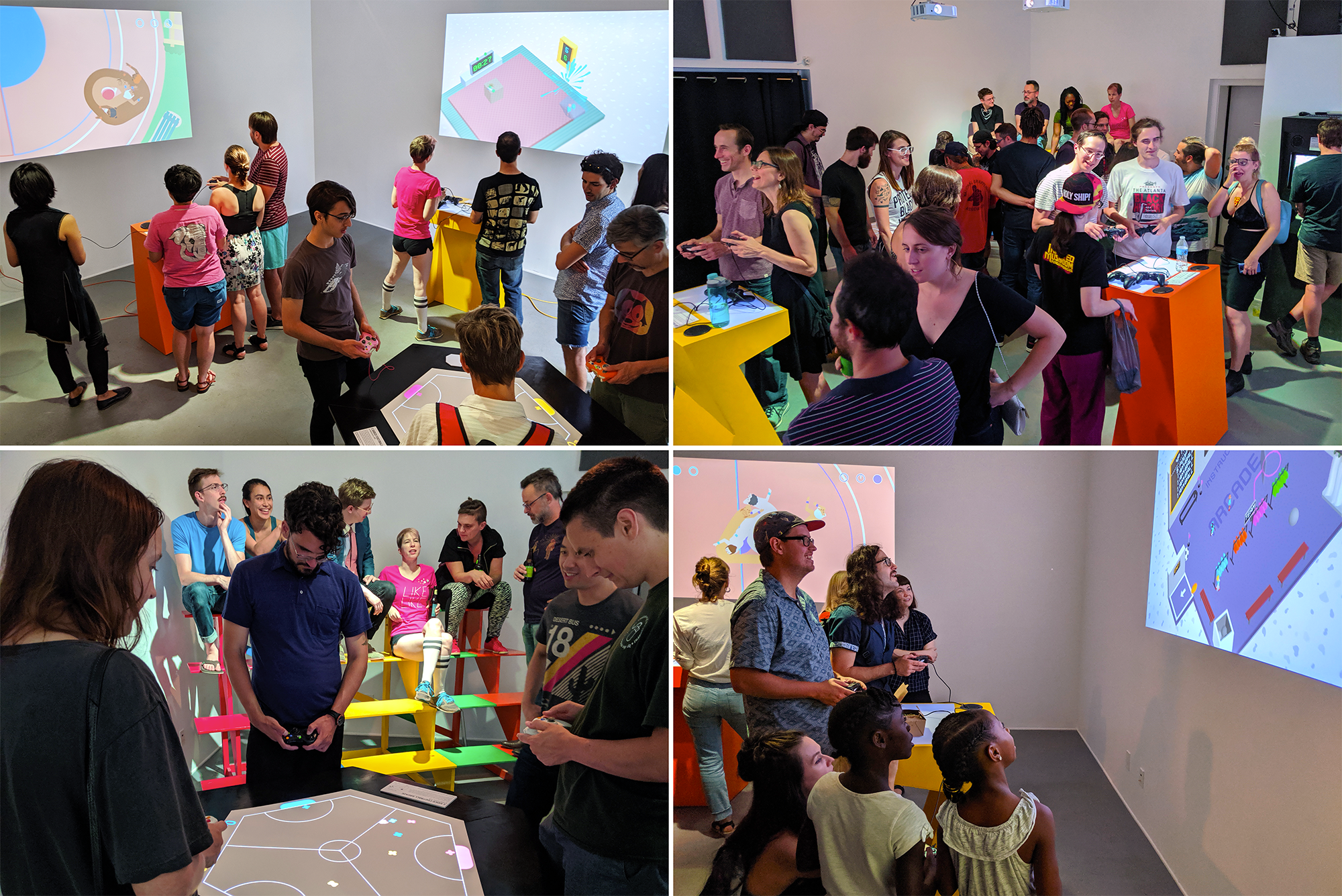 Nathalie Lawhead (aka AlienMelon) is an artist and independent game designer based in Irvine, CA. Throughout the years she created a bizarro computing world made of decaying operating systems, apocalyptic apps, fascist antiviruses, and friendly virtual pets. Between pixelated revelries and hysterical glitches there are authentic moments of vulnerability. Lawhead’s playable artifacts manage to explore self-doubt, disconnection, and the horrors of our digital life in a challenging and humorous way. 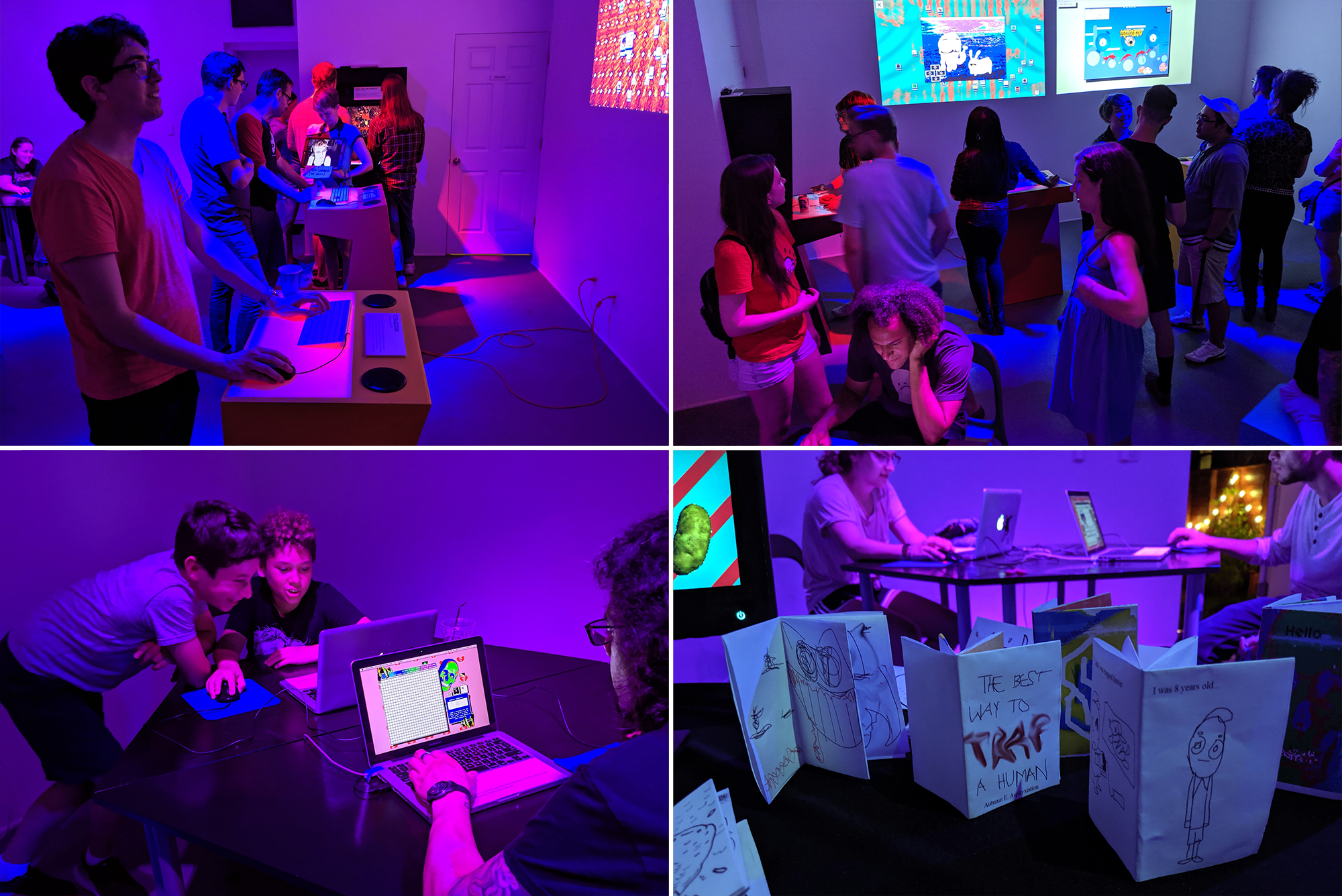 Dystopias seem to dominate representations of future in videogames. Whether post-apocalyptic or cyberpunk, they provide a perfect backdrop for individualistic fantasies of destruction and survival. As the real world catches up with the most pessimistic predictions, we want to highlight games that prefigure better futures. Join us for a night of eco utopias, afro-futurist visions, cyberqueer adventures, joyful insurrections, and fully automated communisms. 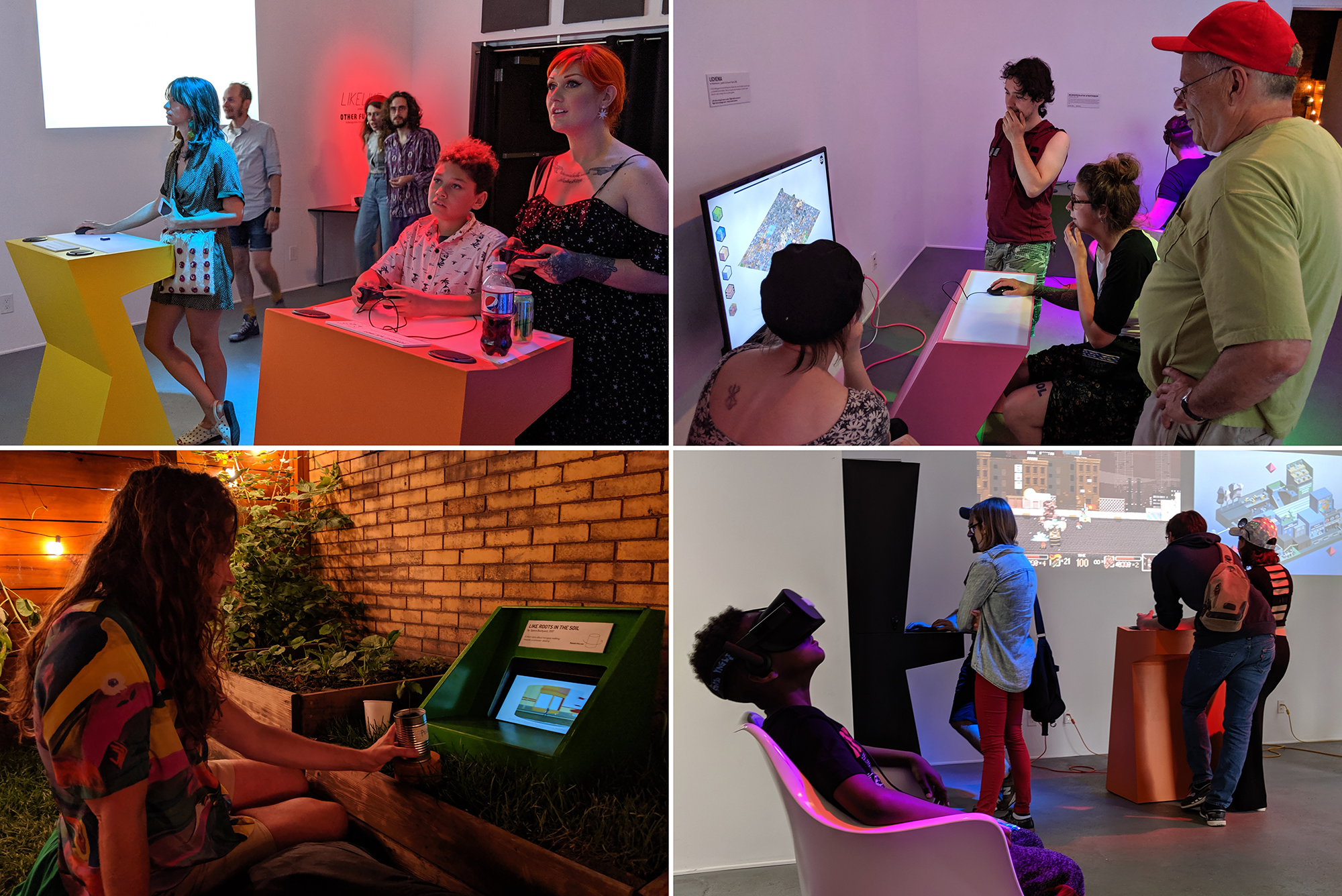 An exhibition of games playing with your perception. Optical illusions, forced perspectives, infinity mirrors, recursive screens, and assorted eye candy.
This is your brain on games. 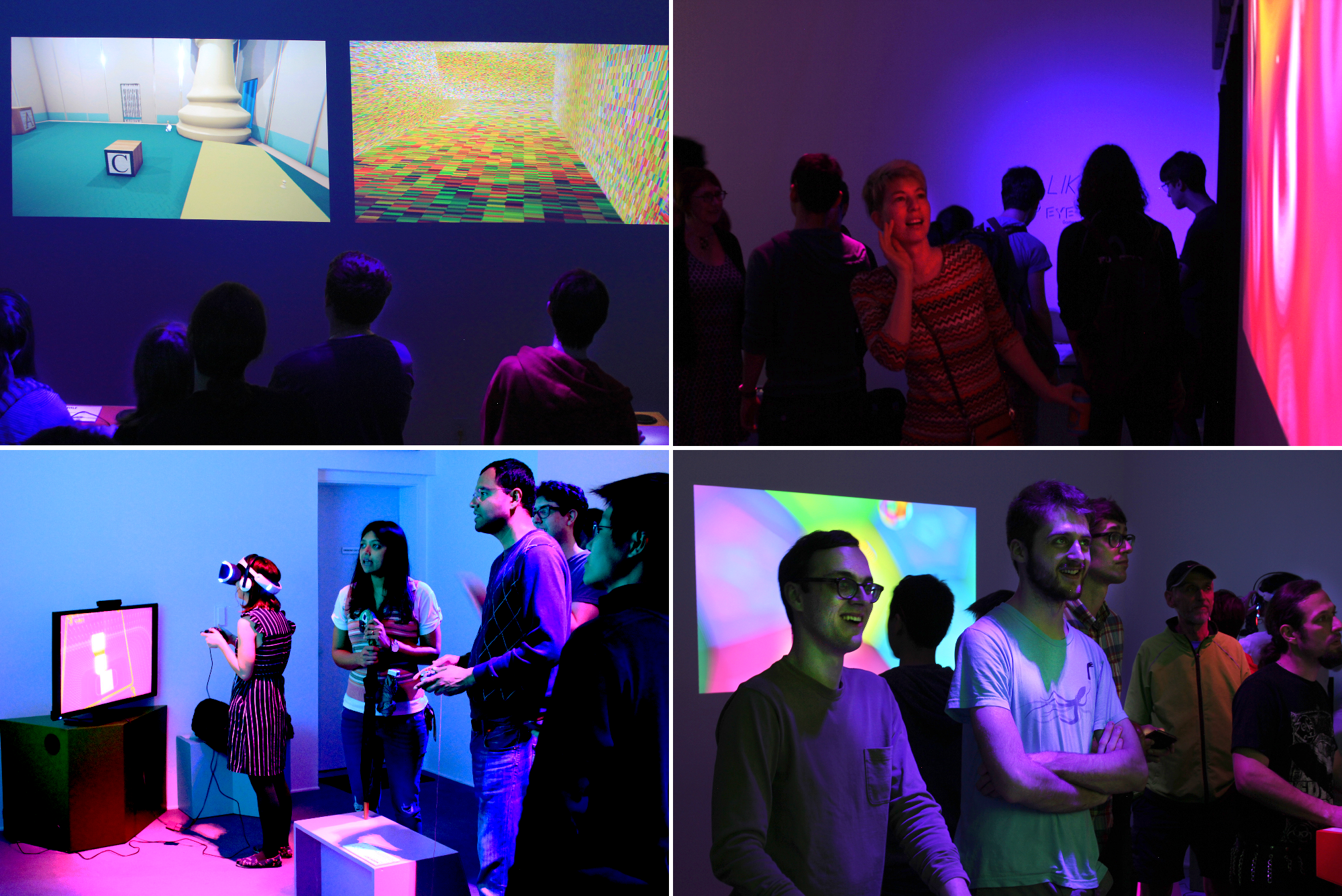 The Middle East in videogames is always portrayed as the set of imperialist wars or orientalist fantasies. Two years since the beginning of Trump’s Muslim ban, in a time when game communities are recruiting grounds for white supremacists and mass murderers, we want to offer a counternarrative. This exhibition includes six games and interactive works presenting a nuanced view on the politics, history, and mythology of Iran. 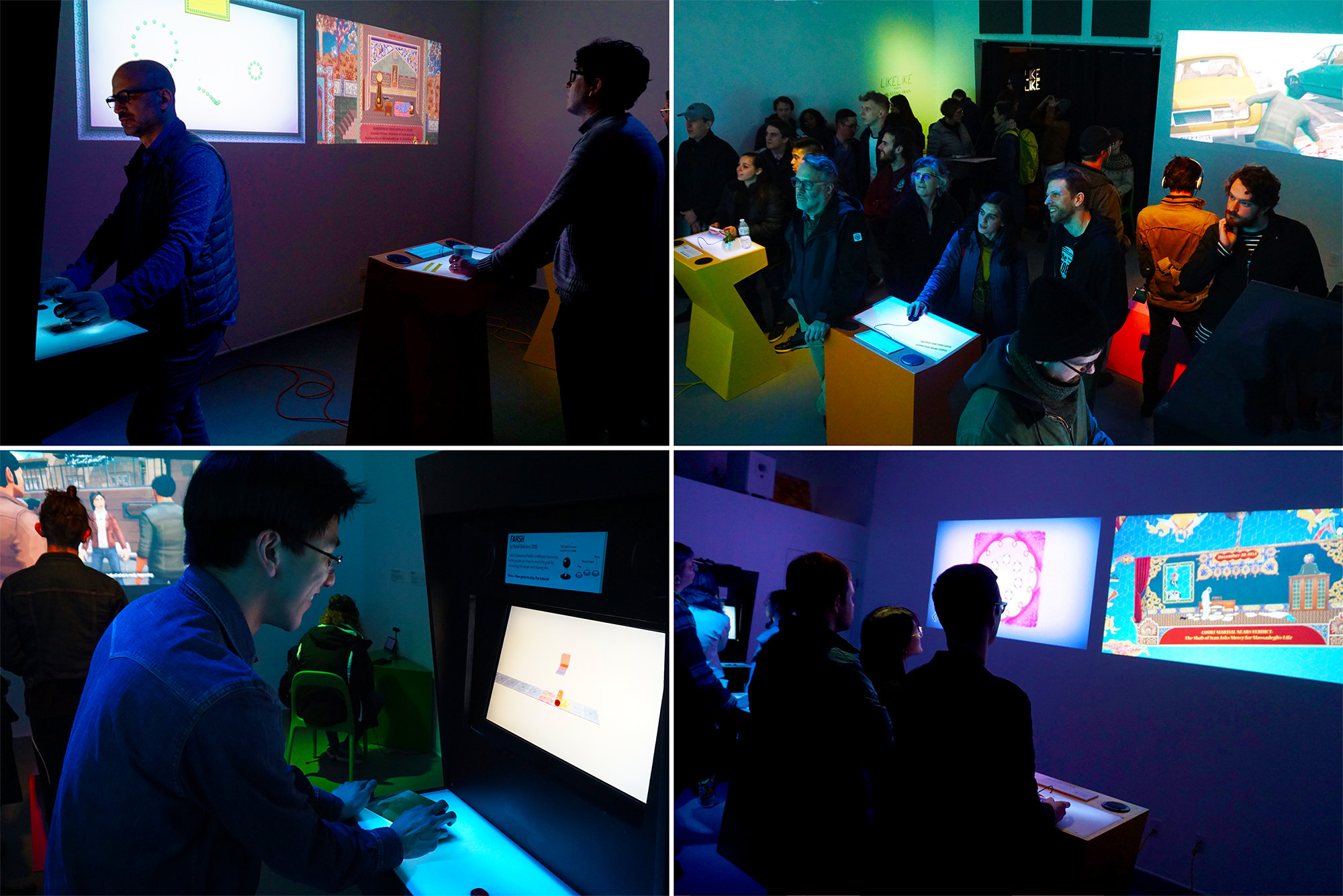 An X-rated exhibition of games about the horrors and the awkwardness of courtship. Craft the perfect dick pic, hookup with everyone and everything, speed date with emotional wrestlers, make the first move at a party over and over, be the target of pick-up artists and learn their techniques!
The games in Bad Flirt are safe spaces to exorcise our worst dating nightmares. 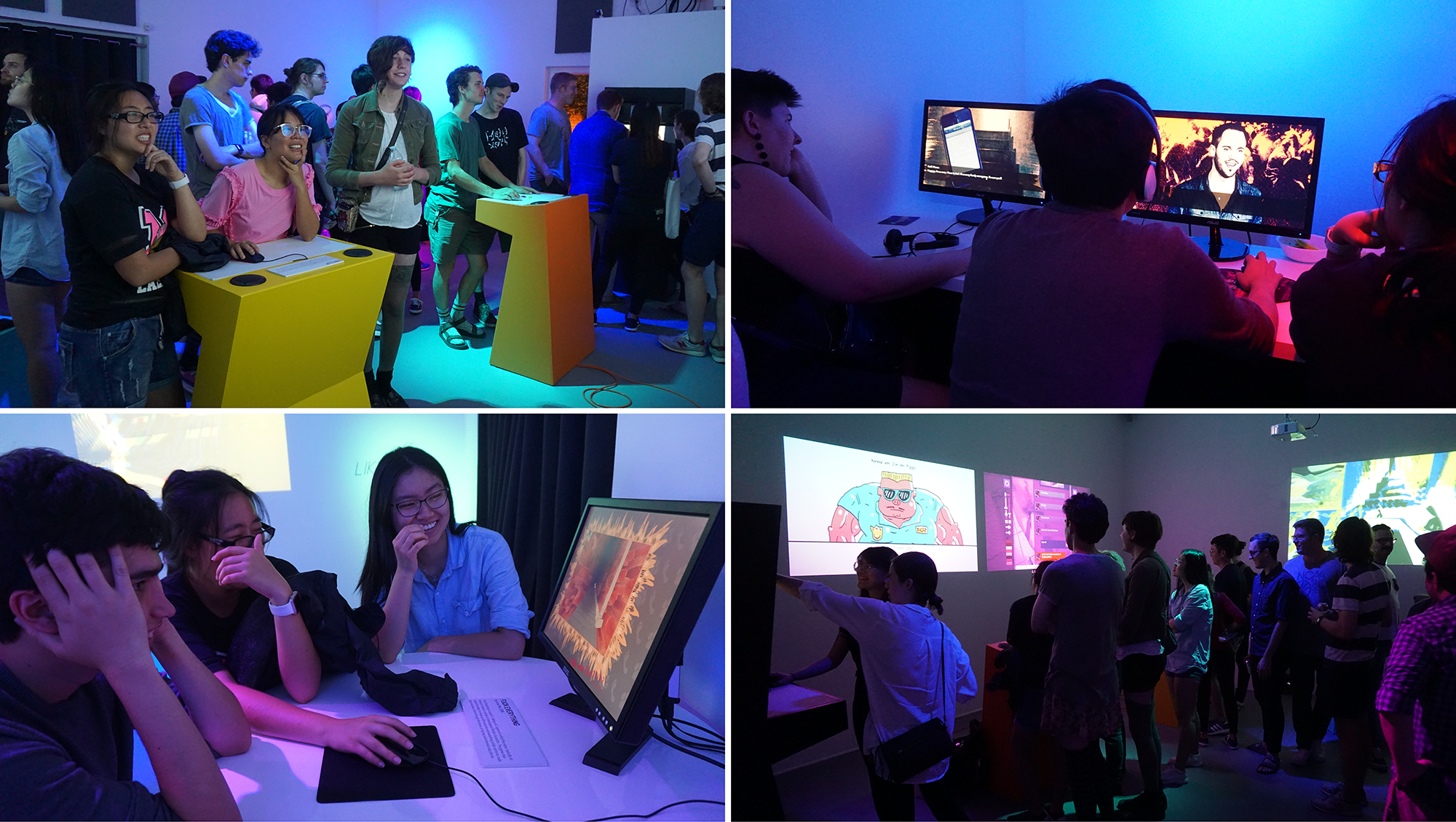 On July 19th a stolen car rolled down the hill driverless and crashed into likelike’s front door. We acknowledge this irruption of real life into the art world with a special exhibition of delinquent driving games that are not Grand Theft Auto.
What it is like to make love to a gay car? To be a one-armed bear at the wheel? To steal a car from your boss and drive it through an infinite shopping mall? To escape your past during Italy’s tumultuous seventies? To drive blindfolded against traffic? 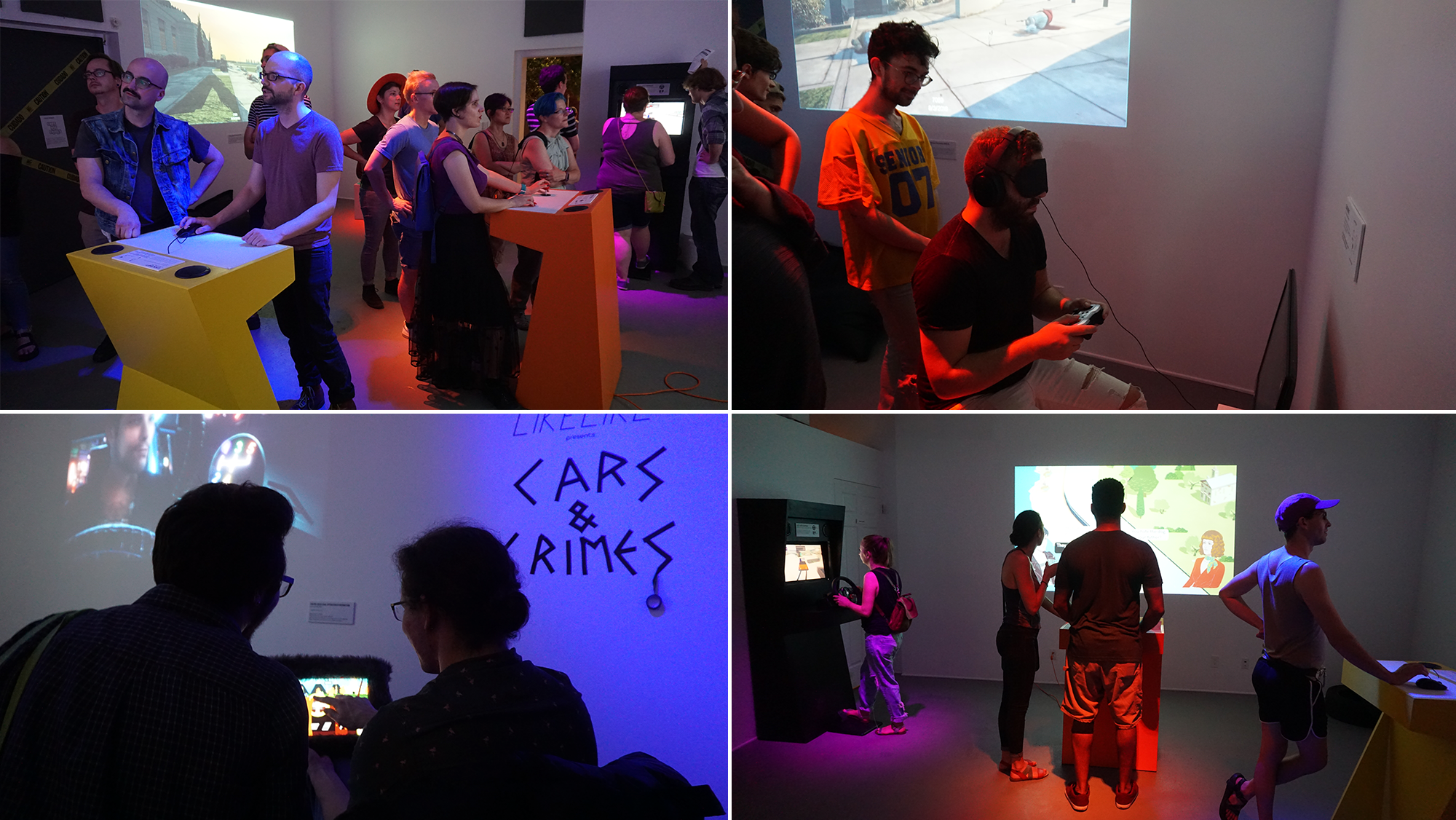 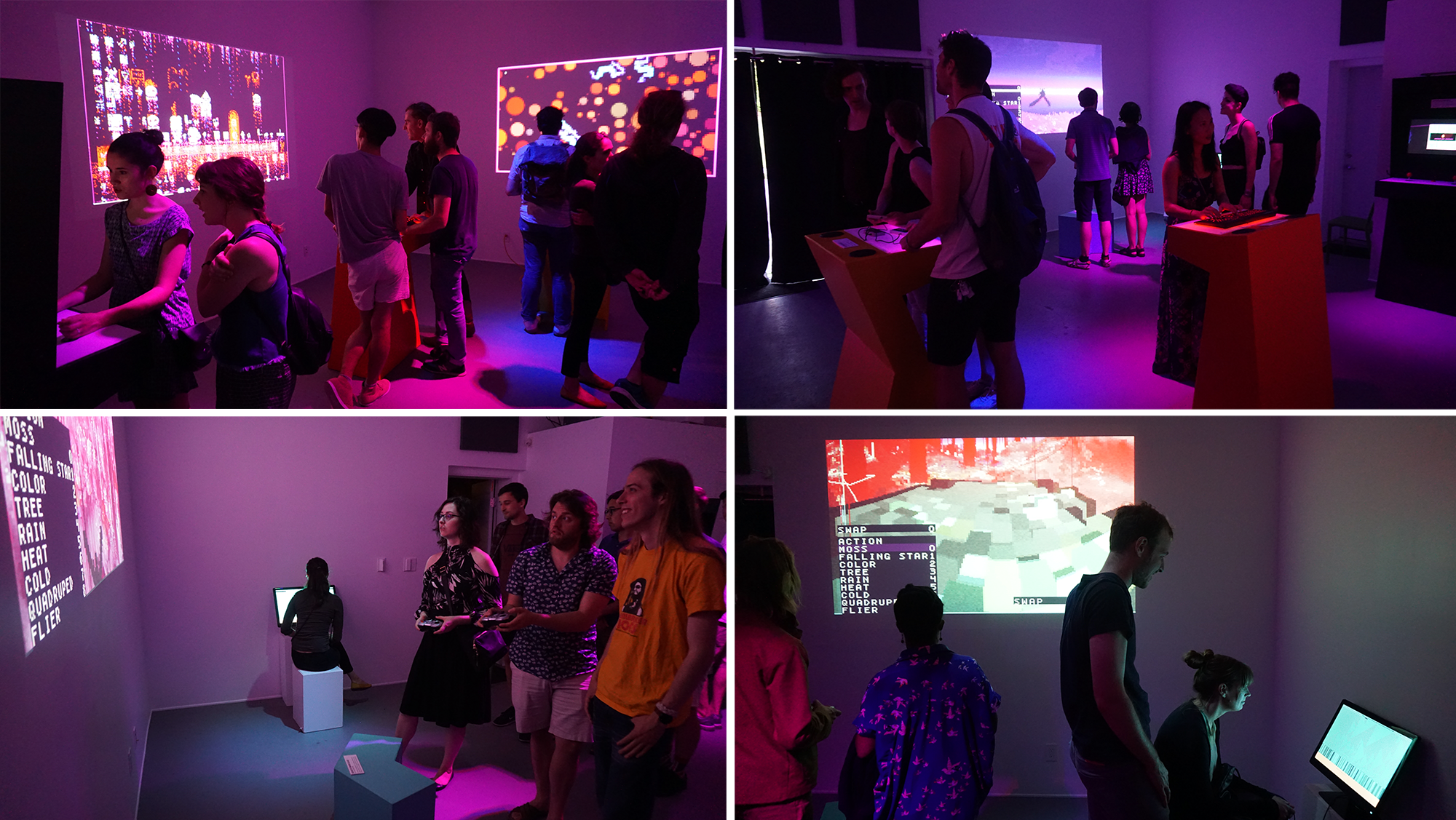 Enter a world of sensual, infinitely malleable avatars. Healing bodies, metamorphosing bodies, impossible bodies. The games included in this exhibition play with magical anatomies and queer desires, acting as antidotes to the disembodiment of the digital realm. 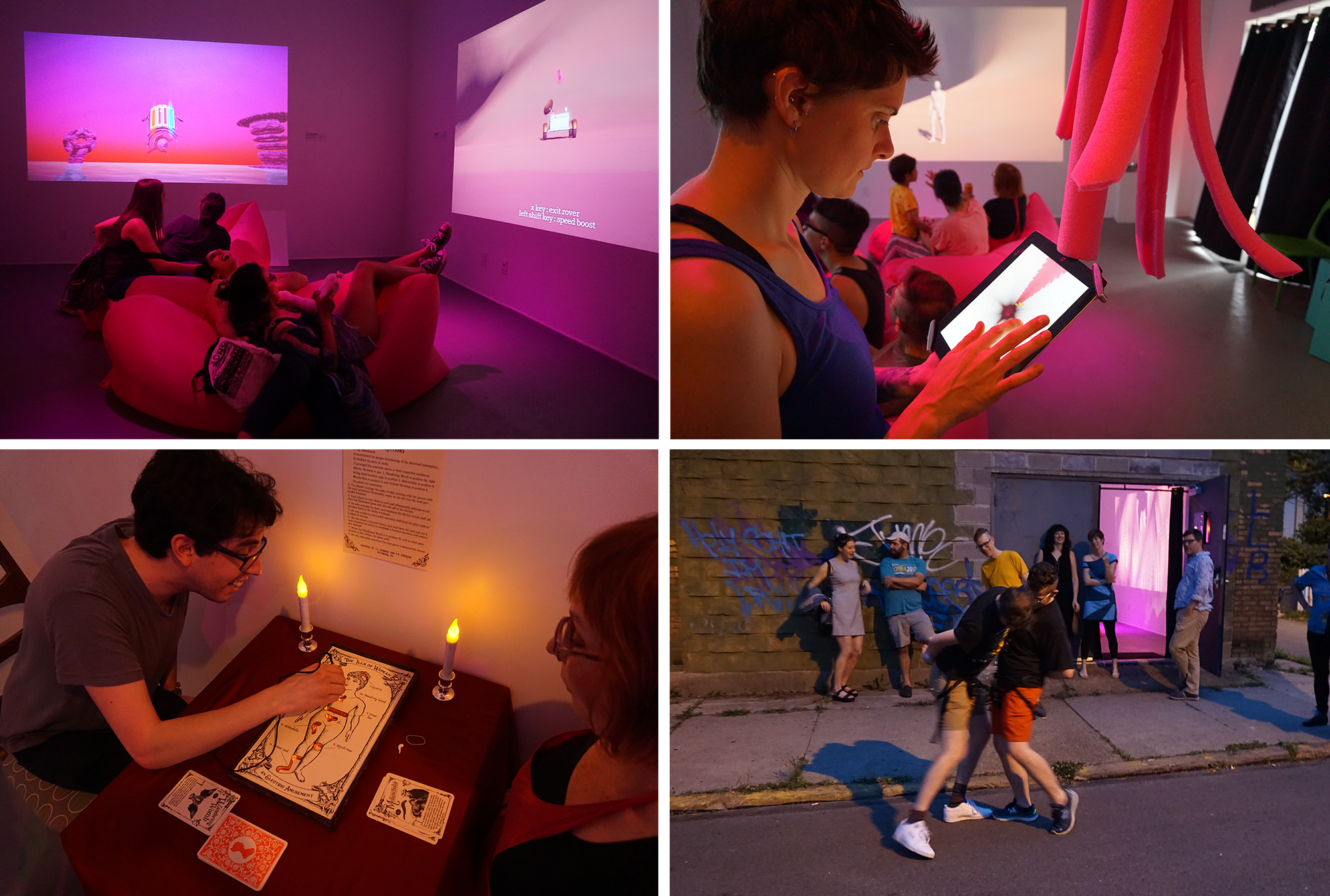 Is play the antithesis of work? The games included in this exhibition confront the theme of labor from a variety of perspectives. Solve the gender pay gap with crimes, mine gold on a magical asteroid, revel in white collar alienation, discover new types of emotional labor, shatter glass ceilings and gender bias, fantasize about a post-work society.
Free entry and free play, you have nothing to lose but your chains! 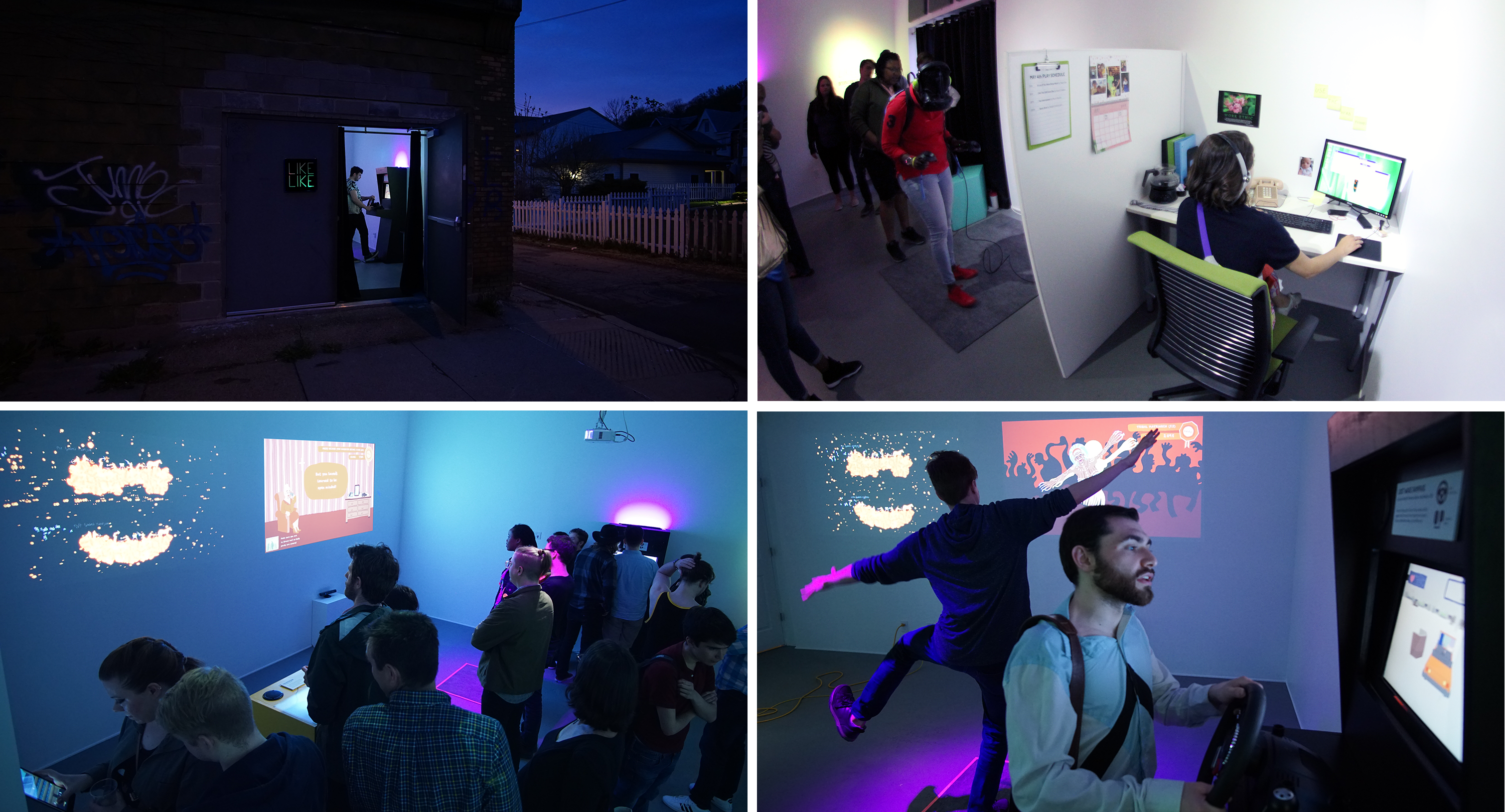 Citizen Canine is an exhibition of videogames that look at our society from the eyes of our best friends. Solve a reactionary squirrel conspiracy, create mayhem in a Russian subway station, selectively breed the purest purebred, build a city of fleas and ticks, lead an operatic animal strike…
This is not just memes and cuteness, it’s radical pawlitics!

*Bring your own dog to the show! We’ll have treats, pee cleaning supplies, and a fenced outdoor area.

SHOOT NOT SHOOT is an exhibition of games reimagining the First Person Shooter. Guns in heavens, shooting as painting, VR performance and live action roleplay: six projects about aiming at others and be in the crosshair. 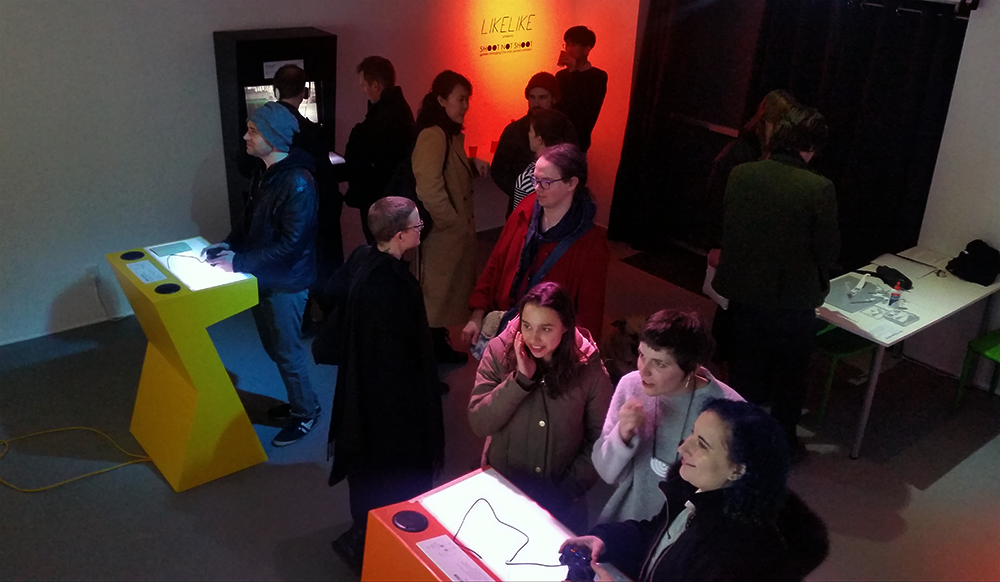 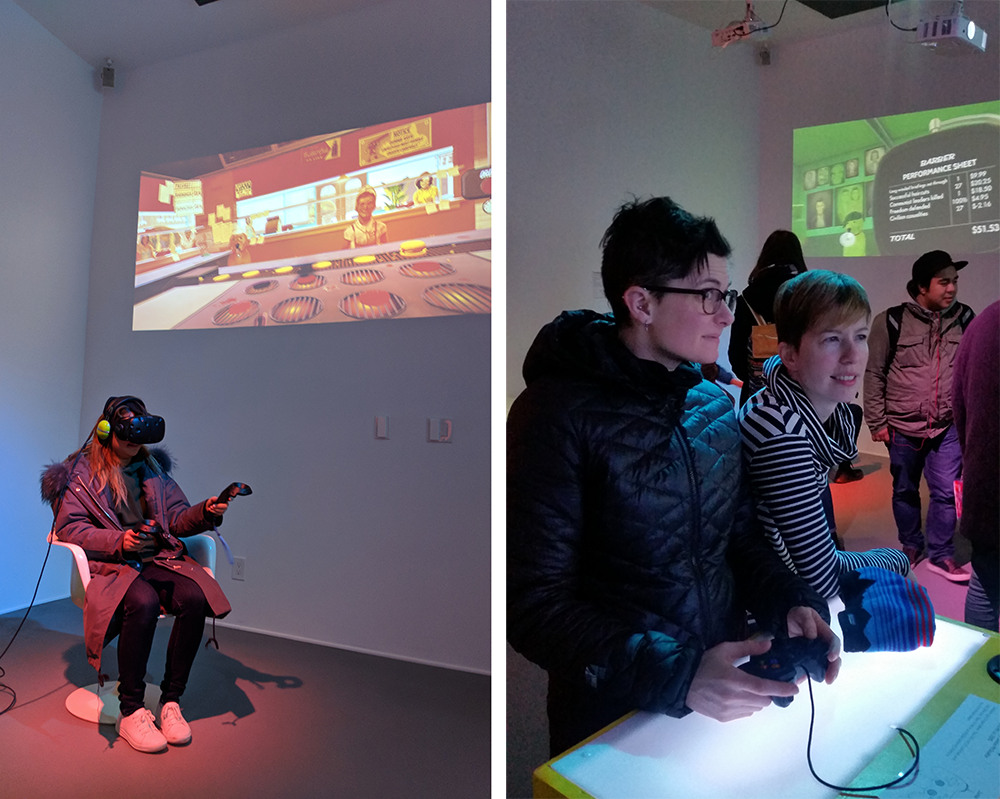 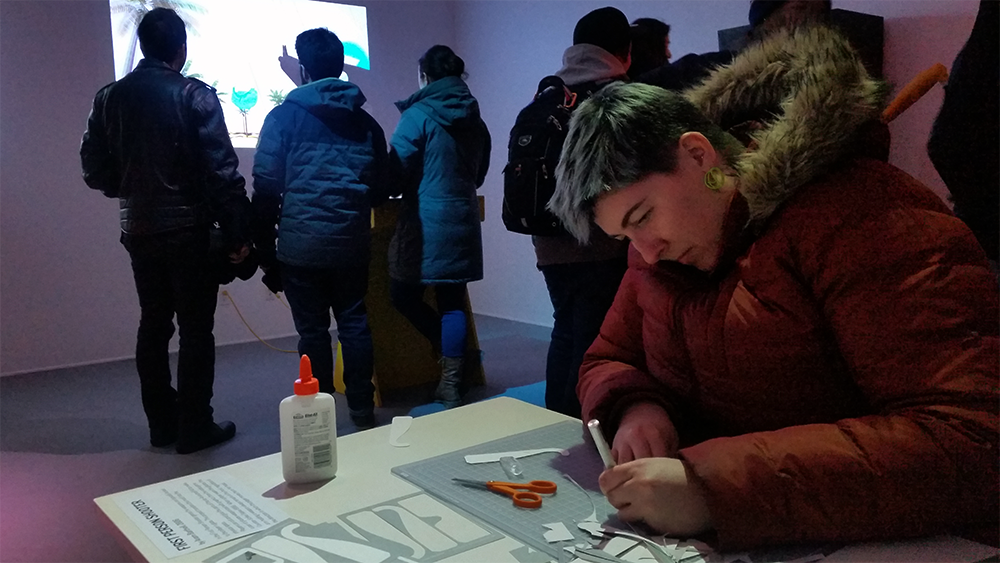 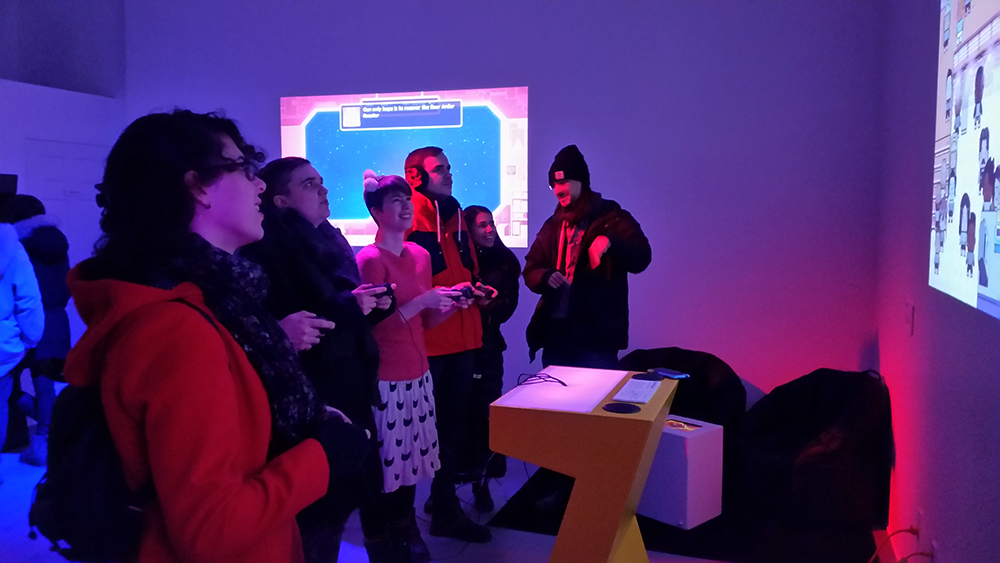 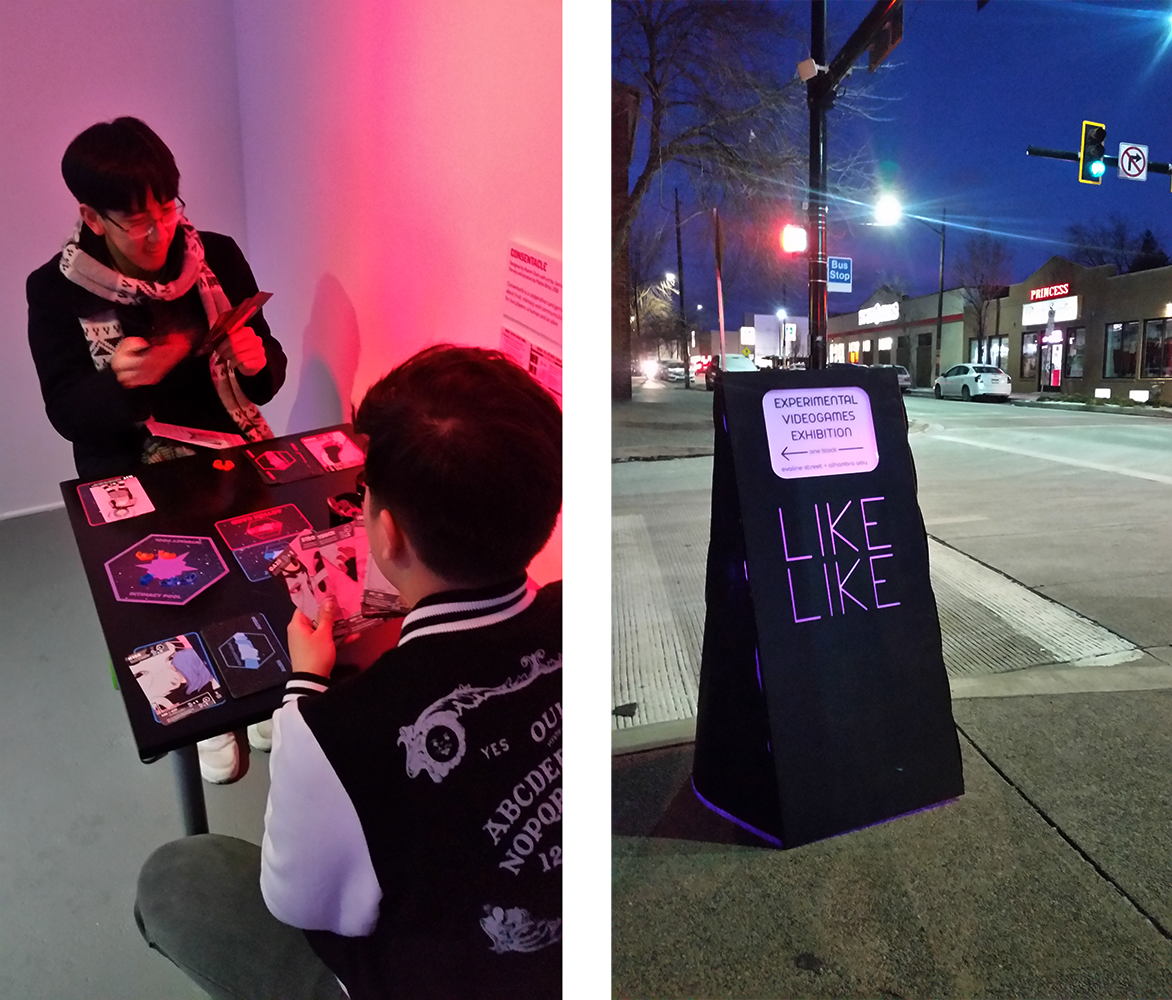 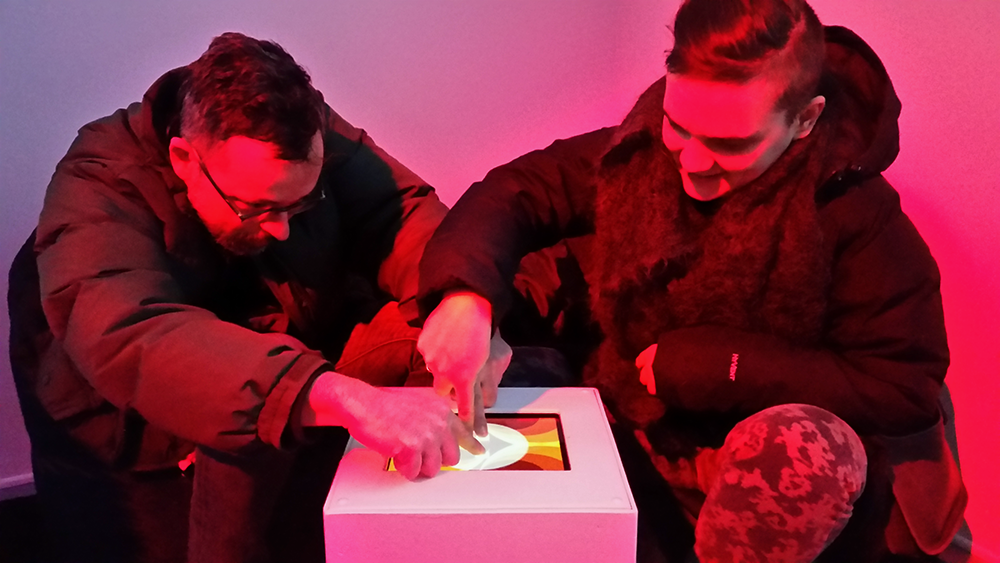 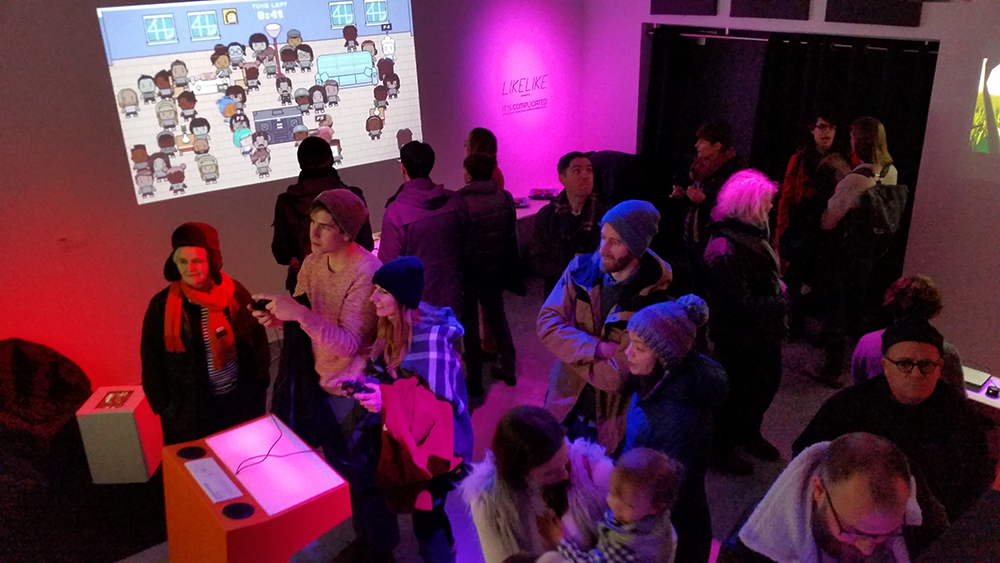